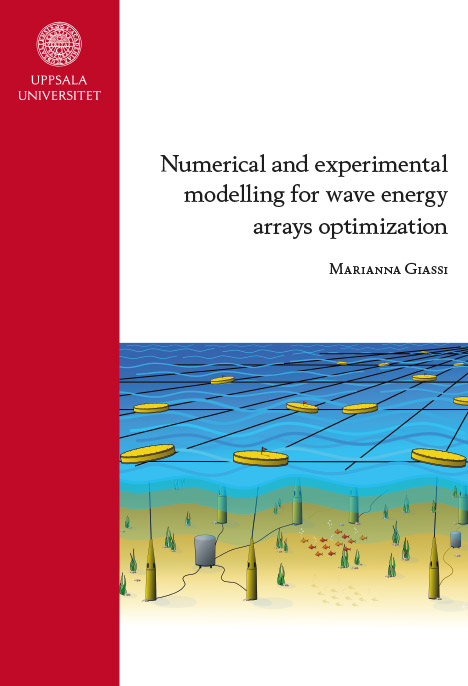 Many wave power conversion devices, especially point-absorbers, do not provide alone the necessary amount of converted electricity to be cost effective, instead they are designed to be deployed in arrays of many units. Such arrays, or parks, can satisfy a large-scale energy demand, reduce the costs of the produced electricity and improve the reliability of the system.

The performance of a wave energy park is affected by multiple and mutually interacting parameters, and the complex problem that arises during its design is called array optimization.

The scope of the present thesis is to study such systems and their design, by the development of an optimization routine able to predict the best layout of a wave energy park under fixed constraints. The wave energy converter considered is the point-absorber developed at Uppsala University, which consists of a linear electric generator located on the seabed and a floating buoy at the surface.[...]

Jennifer Leijon, "Wave Power for Desalination", Comprehensive Summaries of Uppsala Dissertations from the Faculty of Science and Technology, ISSN 1651-6214, 1959 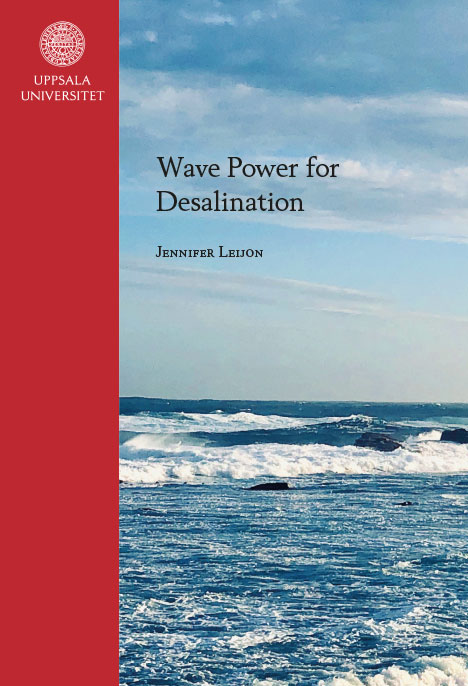 This doctoral thesis presents work related to wave powered desalination. Wave power for desalination could be an interesting alternative for islands or coastal regions facing freshwater shortage, and several systems have been proposed in literature. However, desalination is a process which demands a lot of energy. Studies presented in the thesis indicate that the wave energy converter designed at Uppsala University in Sweden could be used for desalination. This wave energy converter includes a floating buoy connected via a wire to a linear generator. The linear generator has magnets mounted on its movable part (the translator). Small-scale experiments have been included, indicating that intermittent renewable energy sources, such as wave power, could be used for reverse osmosis desalination. Moreover, hybrid systems, including several different renewable energy sources, could be investigated for desalination. There may be interesting minerals in the desalination brine. The thesis also includes investigations on the magnetic material inside the linear generator, as well as on control strategies for wave energy converters. An opportunity of including different types of ferrites in the linear generator has been analyzed. The thesis also presents pedagogic development projects for the electro engineering education at Uppsala University, suggesting that including a greater variability and more student-centered learning approaches could be beneficial.

Arvind Parwal, "Grid Integration and Impact of a Wave Power System", Comprehensive Summaries of Uppsala Dissertations from the Faculty of Science and Technology, ISSN 1651-6214, 1842 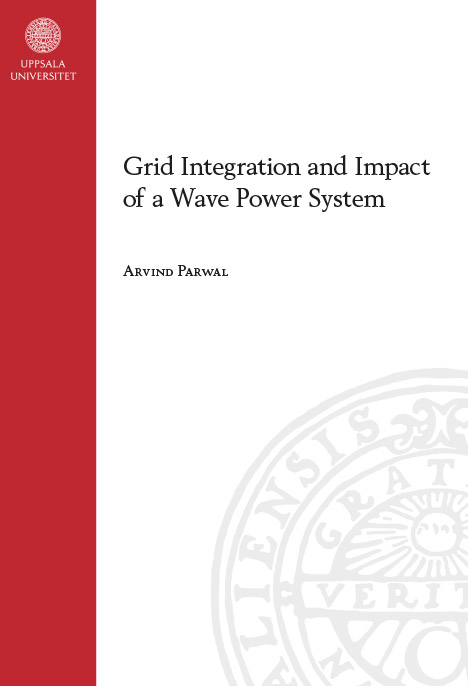 Increasing energy consumption and concern for carbon emissions has boosted the demand for renewable energy production. The focus on renewable energy has gained much attention in wind, solar, hydro and wave power generations. Wave power has great potential due to its high energy density but there are challenges as well. This thesis addresses some of the challenges involved in the grid integration of wave energy and in maintaining power quality. In this thesis a grid connection of permanent magnet linear generator (PMLG) based wave energy converter (WEC) as a renewable energy source is evaluated at the Division of Electricity, Uppsala University.

The grid impact of a wave energy park in terms of flicker, voltage variations and harmonic distortion at the grid-connection point are investigated extensively. The short-term flicker level generated by the WEC and a wave energy park (WEP) related to the rated WEP power and grid impedance angle at the PCC are evaluated.[...]

Mohd Nasir Ayob, "Adaptation of wave power plants to regions with high tides", Comprehensive Summaries of Uppsala Dissertations from the Faculty of Science and Technology, ISSN 1651-6214, 1795 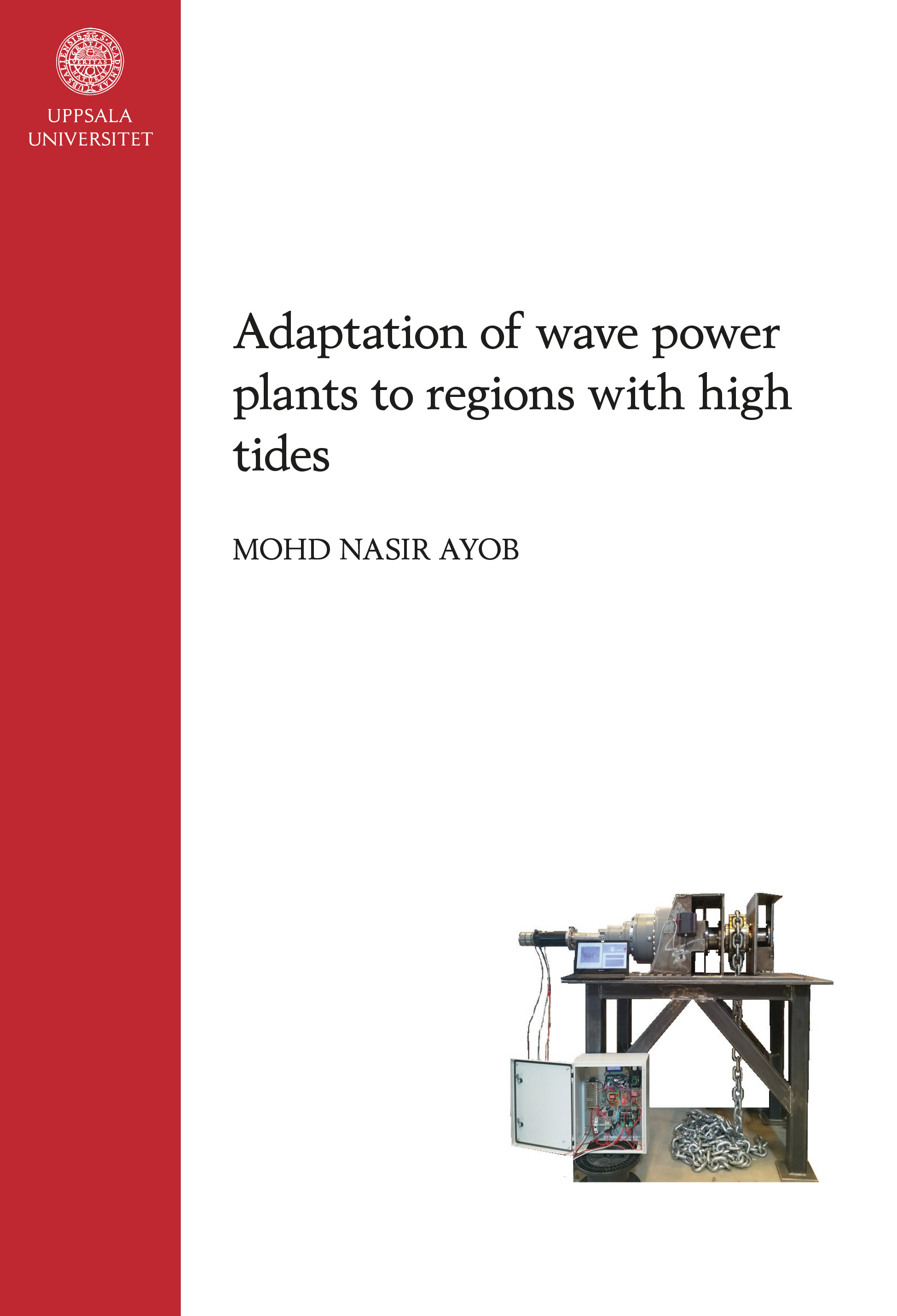 The wave energy converter (WEC) developed at Uppsala University is based on the concept of a heaving point absorber with a linear generator placed on the seafloor. The translator inside the generator oscillates in a linear fashion and is connected via a steel wire to a point absorbing buoy. The power production from this device is optimal when the translator’s oscillations are centered with respect to the stator. However, due to the tides, the mean translator position may shift towards the upper or lower limits of the generator’s stroke length, thereby affecting the power production. This effect will be severe if the WEC operates in an area characterized by a high tidal range. The translator may be stuck at the top or rest at the bottom of the generator for a considerable amount of time daily.[...]

The depletion warning of non-renewable resources, such as gas, coal and oil, and the imminent effects of climate change turned the attention to clean and fossil fuel-free generated electricity. University research groups worldwide are studying solar, wind, geothermal, biomass and ocean energy harvesting. The focus of this thesis is the wave and marine current energy researched at the division of Electricity at Uppsala University (UU).
The main drawbacks that hinder the commercialization of marine energy converter devices is a high installation, operation, maintenance and decommissioning cost. Furthermore, these processes are highly weather dependent and thus, can be time consuming beyond planning. In this thesis, an evaluation of the cost, time and safety efficiency of the devices’ offshore deployment (both wave and marine current), and a comparative evaluation regarding the safety in the use of divers and remotely operated vehicles (ROVs) are conducted.[...] 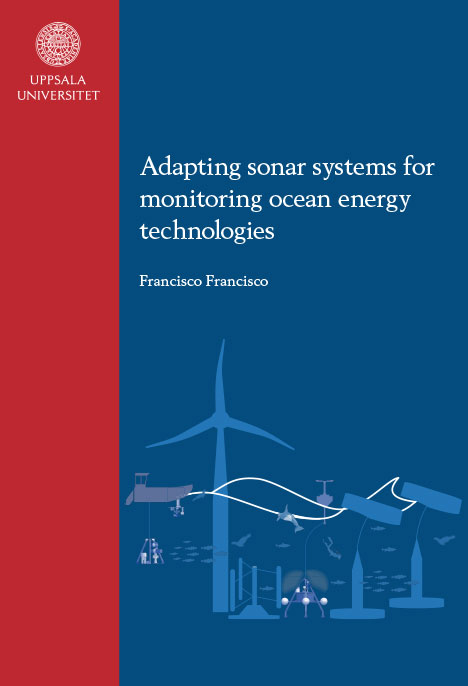 The global energy sector is under profound reforms aiming towards renewable energy sources, clean technologies and expansion of smart grids, all with the additional aim of providing affordable and dependable electricity for everyone. A reduction of carbon dioxide emissions is a priority on the global agenda, and to achieve that, cleaner energy technologies has to be more integrated into the energy mix. This thesis focus on a sustainable implementation of wave, tidal and offshore wind power, wherefore there is a need to investigate more about the prerequisites and consequences ocean energy can have on the marine environment. For that, reliable, cost effective and continuous environmental monitoring framework is necessary in order to support and safeguard ocean energy operations.[...] 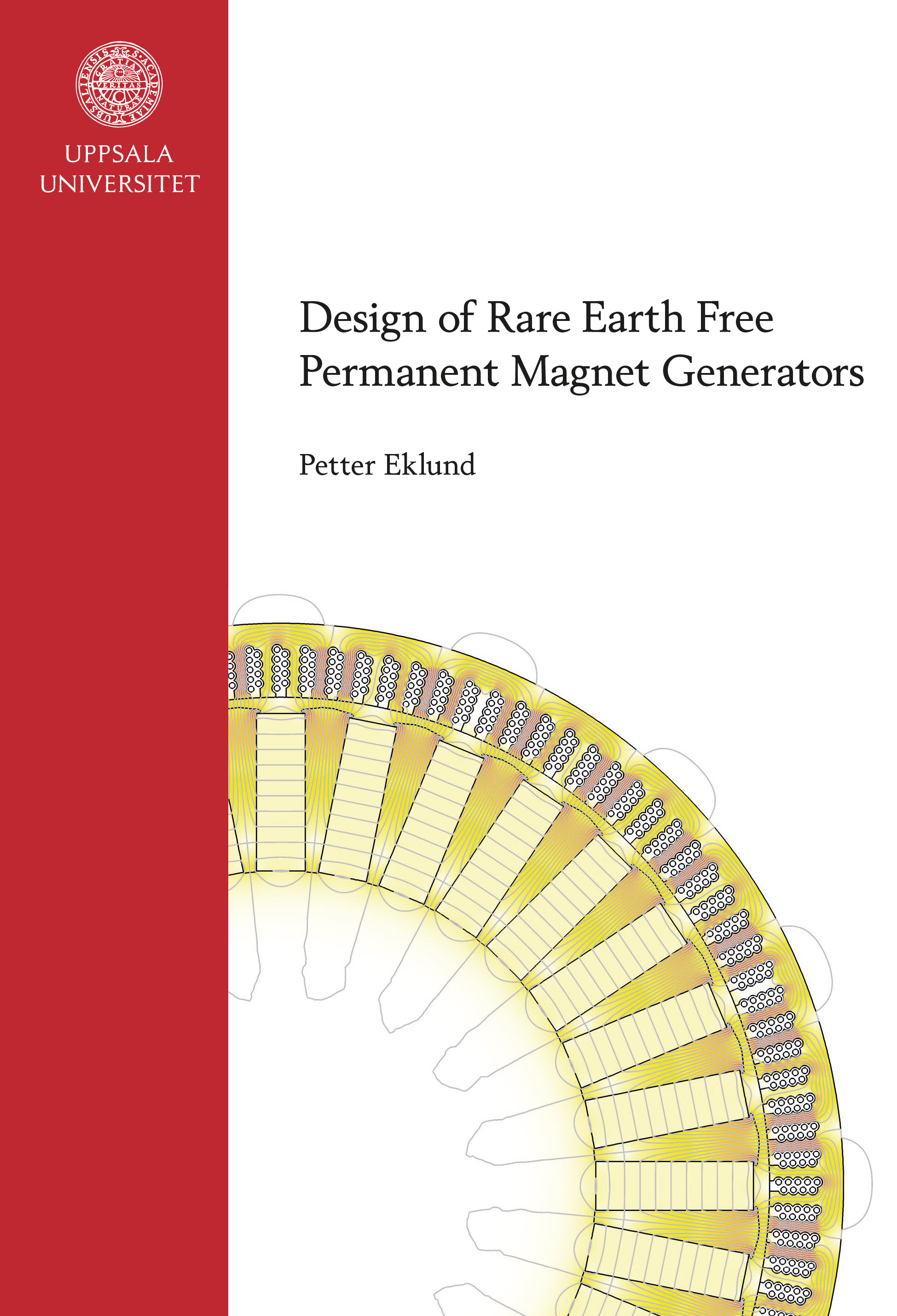 Low speed permanent magnet (PM) synchronous generators (SGs) are commonly used in renewable energy. Rare earth (RE) PMs such as neodymium-iron-boron are a popular choice due to their high performance. In 2011 supply and cost issues were added to the previously existing environmental concerns regarding REPM raw materials as the world's major producer China imposed export restrictions. This thesis aims to investigate and propose design solutions for PMSGs that do not use REPMs. Two approaches are used: to design generators using the cheaper and more abundant ferrite PM materials, and to investigate how properties of new PM materials influence SG design.[...]